TestRail’s permission and role system allow you to configure and restrict the project access and permissions of individual users and groups. TestRail comes with built-in roles that can be customized and extended. It is also possible to configure per-project access for users and groups, enabling you to customize TestRail’s access control for your needs.

You can manage users & permissions in the administration area under Administration > Users & Roles in TestRail.

Roles within TestRail are collections of permissions that can be assigned to users (globally and per project) and groups (per project). TestRail already comes with a few pre-configured useful roles such as Guest, Tester, or Lead. You can also change the built-in roles or add your own ones. To configure TestRail’s roles, select Administration > Users & Roles. 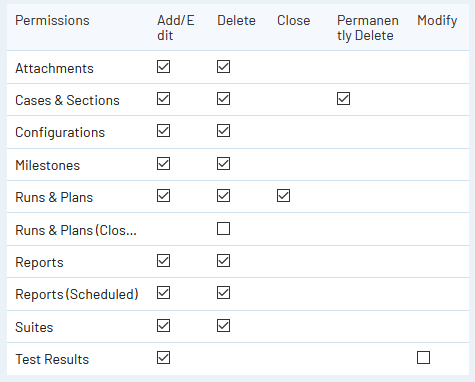 TestRail 7.0 added new permission “Permanently Delete”. This will help you limit which users of your instance, have permission to delete cases permanently. The other option is to mark the test cases as deleted without permanently deleting them.

When test cases are marked as deleted they can still be seen by toggling “Display Deleted Test Cases”. If you would like to restore any of them, choose the test case and go to its History section. There you can select to restore the test case.

To change the global role of a user, you can either select the role on the Users & Roles page or change the role when you edit a user account.

Please note that you can also assign roles (and thus restrict permissions) to administrators. This can be useful if an administrator wants to hide specific projects or disable some functionality in the user interface. But remember that administrators can always change their own roles, so you cannot count on roles to enforce permissions for administrators.

The ‘No Access’ role will deny users access to projects. If this role is set as a user’s global role, the user will not have access to any TestRail projects unless project settings grant different permissions.

The ‘No Access’ global role requires TestRail 6.6 or later.

Groups can be used to manage a collection of users, e.g. a team of testers, geographical teams, or users that belong to a specific client or customer. You can define and configure groups under Administration > Users & Roles. 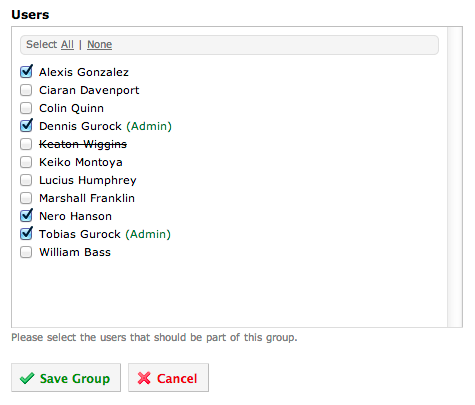 You can specify and override users’ global roles within each project. To do this, just edit a project in the administration area and select the Access tab. 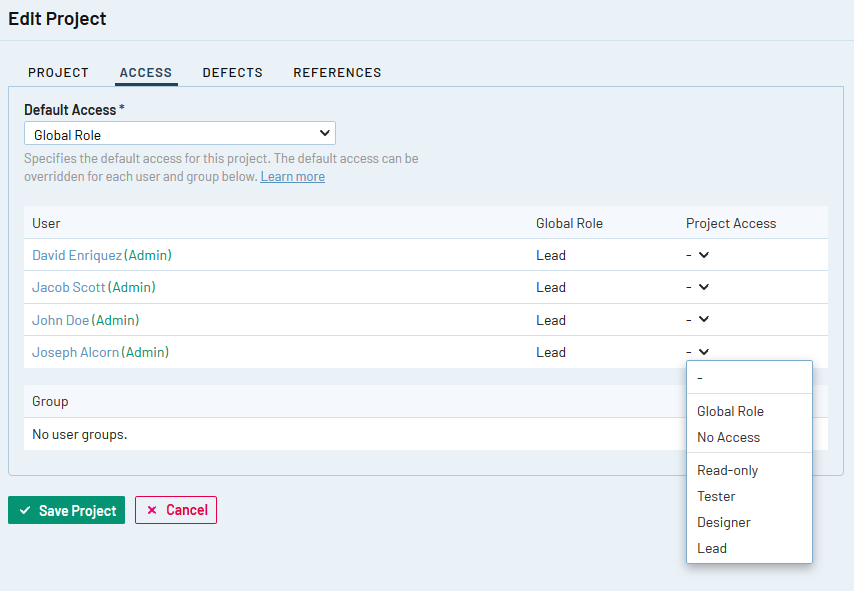 The combination of global roles, default project access, and user/group-specific access for projects makes TestRail’s roles and permissions system very flexible. Please see the next section for some examples of how to configure TestRail for typical scenarios.

Providing administrative permission to a user

The Administrator permission can be assigned by going to Administration -> Users & Roles -> Select a user -> Access tab. Here, make sure the “This user is an administrator” option is checked and save the user. 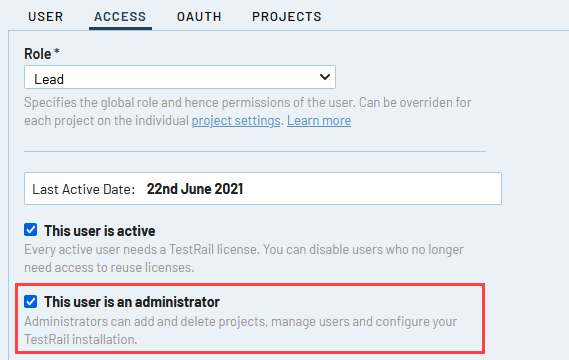 Now the user will have Administrator privileges.

With TestRail Enterprise, you can grant certain users a more specific set of administrative permissions around specific projects, without granting them broad administrative privileges in your overall TestRail instance. To learn more, check out the user guide article on Project Level Administration.

The following examples explain how to configure TestRail to accomplish some common scenarios with regard to roles and permissions.