We’re pleased to announce the release of TestRail 7.8 which contains a number of reporting and chart improvements.

We’ve introduced some new chart and report functionality in this release. Customizable charts give you the power to create a range of new views of your testing data, enabling you to get at the information you need more quickly, directly from the dashboard and project overview pages.

We’ve also introduced the capability to set statuses as not applicable, so they won’t appear in your reports at all if you don’t want them to. And we’ve also added a stacking capability to the property distribution reports so that you can include more than one dimension in your report.

Customizable charts have been introduced in the dashboard and project overview areas of TestRail, enabling you to make changes to the information displayed in the chart and get at important data more quickly and easily than ever before.

Both charts come with the same controls and default settings, but the scope for each is different. The customizable chart on the Dashboard view allows you to visualize data across all your projects, whereas the chart in your project overview constraints the chart data to the context of the current project.

By default, both charts default to the classic activity (test changes over time) view for the dashboard and project overview. However, each user has access to a set of chart controls that allow them to select which TestRail entity they want to display data for, the chart type, and the period. 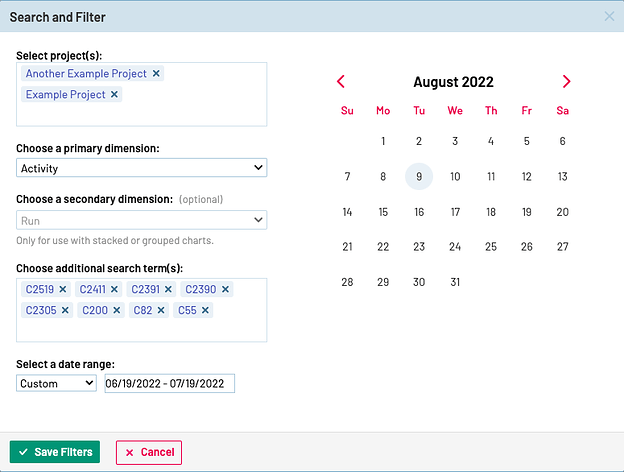 Additionally, some chart types allow for a second dimension to be added, and a selector for this is displayed when appropriate. 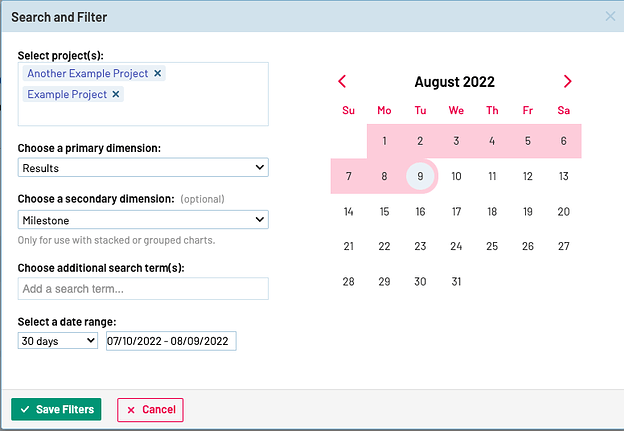 Once a set of chart settings have been selected for a project or for the dashboard, they will be persisted until you change the settings or click the Reset button. Additionally, you can export the results to your clipboard, download the chart to an image file, or download the chart data to a CSV or an XLS file.

Once your chart has been defined, you can drill down to see further information by clicking on a segment of your chart. Learn how to use and customize charts here.

Administrators can now configure an additional setting on their test statuses: “This status is ignored in TestRail metrics”. Enabling the setting will result in the status being ignored when TestRail generates progress charts and reports:

The status will also be ignored when results are aggregated, e.g. into plans or milestones - and when reported on in TestRail reports such as a Milestone Summary report.

The status is displayed in some other areas though, like the activity view for a run or plan, for example, and will be reflected in some reports such as property distributions. Learn more about ignoring test results in reporting by status here.

By popular demand we have introduced an additional option to the TestRail Property Distribution reports, enabling users to select a further dimension (a stacking variable) to the reports by selecting it from the Grouping > Stack the cases by dropdown field: 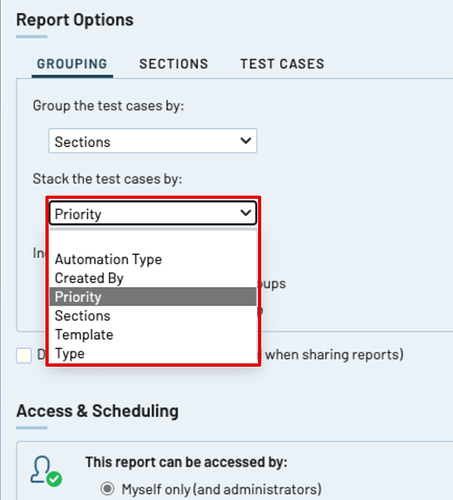 Selecting a stacking option (such as Priority in the example above) will result in the additional dimension being applied to your report. In the resulting chart:

And in the table associated with the report/chart:

Running the report without the stacking variable will generate the chart and table without the additional metrics.

TestRail 7.8 has been released for general availability to users on the Early Access release track. Get access to the features introduced in 7.8 now by completing your request to change release tracks here.